Empty Apartments: 20,000 More Housing Units Were Vacant in 2021 Than Before Pandemic Housing and real estate on Putnam St. in San Francisco, Calif. on Tuesday, Sept. 27, 2022. | Michaela Vatcheva for The Standard

In an October surprise, the number of vacant residential units in San Francisco increased by 20,000 to 61,000, new data shows, just as voters are considering a vacancy tax on the November ballot.

A new report on residential vacancies prepared by the Board of Supervisors Budget & Legislative Analyst’s Office was presented at a board committee meeting Thursday. It attributed the jump in vacancies to renters leaving the city during the pandemic, finding 17,514 rental units vacant in 2021 compared with 7,421 available in 2019. 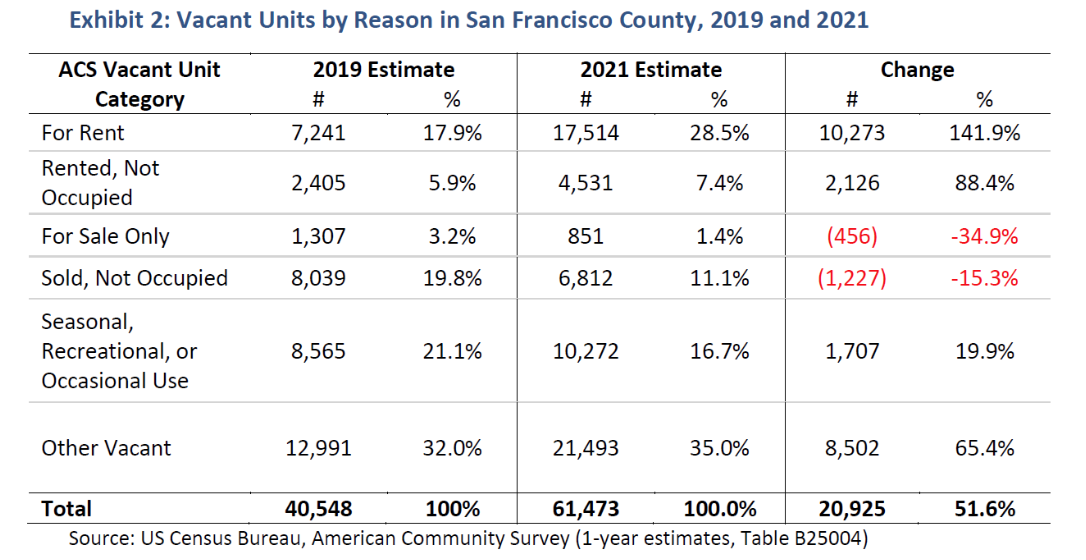 San Francisco has a larger share of vacancies than other American cities, with Boston, Washington, D.C., and New York City trailing by several percentage points.

Supervisor Dean Preston, who commissioned the report, said that he was surprised by the increase in units up for rent, and suggested that market rate rents had failed to reach an equilibrium given the large amount of vacant rental housing. “It strikes me as a market failure in adjusting rents,” Preston said. “It’s a moral issue to have homelessness on our streets and have thousands and thousands of vacant housing units.”

Preston supports Proposition M as a way to incentivize landlords to lease empty homes by taxing landlords who keep housing units vacant. If passed, Prop. M would tax landlords between $2,500 and $5,000 per vacant unit in the first year, and by the third year, the tax would increase up to $20,000 per unit that has been vacant for more than six months. Prop M would exempt single-family homes, duplexes, housing under construction and units that have been vacant fewer than six months.

An analysis of Prop. M conducted by the Controller’s Office in September, which relied on older data, found the percentage of total vacancies to be high, but only 35% of those units had been on the market for more than six months. It found the proposition would generate $9 million in its first year and $15.4 million by 2026.

Steven Buss, director at Grow SF, used the analysis to argue that the vacancy tax would not fill empty housing and that landlords would mostly pay the tax rather than lower rents.

Christin Evans, owner of Haight Street institutions The Booksmith and The Alembic, said during public comment that high residential rents have made it harder to run her businesses because high housing costs mean she has to pay workers more at a time when small businesses are fighting to recover from the pandemic. “I’m glad we’re getting to the point where we’re tracking vacancies and discussing policy solutions,” she said.